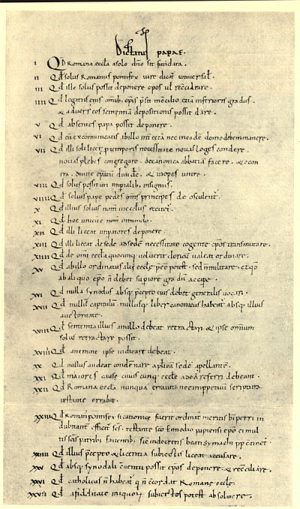 In the arena of Orthodoxy and Roman Catholicism, many articles, epistles, and decrees have been largely circulated between both the Orthodox and Catholic faithful, especially over the last century. When evaluating claims pertaining to each side of the debate, one thing has become quite clear: relations between the two traditions have certainly improved in recent history.

In fact, a sort of ecumenism has begun to advance among both apostolic communities. For some, this is a good thing. For others, not so. Unlike Roman Catholicism, Orthodoxy doesn’t maintain a neatly systematized set of dogmatics, and so ecumenism, with Orthodoxy, is largely based on how Roman Catholicism presents itself to the Orthodox, since the RCC can always defer back to a set of canonized doctrine over the last two millennia. In many cases, the doctrinal definitions provided by Rome maintain mutability and are often presented in different ways by different individuals throughout different eras.

I am often challenged by my Catholic friends to find where in history I can canonically defend my theology or the theology of the Orthodox Church. The challenge is rarely reciprocated, however, as Rome has a sort of monopoly over canonically defined theological terms and doctrines, and this is generally understood. The Roman Catholic Church and its canons is the GotQuestions.org of the Apostolic world. But, as many of us know, that is not necessarily a good thing.

In dialogues between the Orthodox and Rome, Rome has the advantage of doublespeak. If an agenda is clear (communion), the mode in which it is achieved must be mutual. If a roadblock to accord exists (papism), a strategic tool is relativity. And so far, this strategic tool has worked, as relationships are advancing. The Orthodox claim one thing about the papacy, for instance, and Rome counters with a charge of Orthodox “misunderstanding.” The Orthodox ask for clarification and Roman scholars provide it, and vice versa. It is all too convenient, and its fruit ultimately yields a false unification.

With regard to the everlasting debate of Papal Infallibility and Supremacy, this very thing has occurred—repeatedly. We see it in the Joint Commission for Dialogue, in the Chieti agreement, and in the NA Orthodox-Catholic Theological Consultation.

The doublespeak is manipulatively convincing—even to the point that the Orthodox forget just what Rome meant in its bid for primacysuperiority and infallibility. While a normative reading of papal canon law simply reveals what Rome meant in its claims in the post-Schism era, the Roman position is made abundantly clear in the form of the Dictatus Papae.

The Dictatus Papae is a papal document outlining the authority and power of the Bishop of Rome. It is said to have been dictated by Pope Gregory VII in some capacity (whether written, oral, or secretarial)—this being the most common view. Some scholars also believe the document to have been an iteration or reiteration of Cardinal Deusdedit’s canon law, which appears to be virtually identical in its delegation of papal powers. Whatever the case may be, two things are painfully evident and convenient: (1) the Dictatus Papae was written almost immediately following Rome’s excommunication of Constantinople and the beginning of the Great Schism, and (2) it was more extreme in nature than anything before it and anything after it (arguably).

It reads as follows:

1. The Roman Church was founded solely by God.
2. Only the Pope can with right be called “Universal”.
3. He alone can depose or reinstate bishops.
4. All bishops are below his Legate in council, even if a lower grade, and he can pass sentence of deposition against them.
5. The Pope may depose the absent.
6. Among other things, we ought not to remain in the same house with those excommunicated by him.
7. For him alone is it lawful, according to the needs of the time, to make new laws, to assemble together new congregations, to make an abbey of a canonry, and, on the other hand, to divide a rich bishopric and unite the poor ones.
8. He alone may use the Imperial Insignia.
9. All princes shall kiss the feet of the Pope alone.
10. His name alone shall be spoken in the churches.
11. This is the only name in the world.
12. It may be permitted to him to depose emperors.
13. It may be permitted to him to transfer bishops, if need be.
14. He has the power to ordain the clerk of any parish he wishes.
15. He who is ordained by the Pope may preside over another church, but may not hold a subordinate position. Such a person may not receive a higher clerical grade from any other bishop.
16. No synod shall be called a ‘General Synod’ without his order.
17. No chapter and no book shall be considered canonical without his authority.
18. A sentence passed by him may be retracted by no one. He alone may retract it.
19. He himself may be judged by no one.
20. No one shall dare to condemn any person who appeals to the Apostolic Chair.
21. The more important cases of every church should be referred to the Apostolic See.
22. The Roman Church has never erred. Nor will it err, to all eternity–Scripture being witness.
23. The Roman Pontiff, if he has been canonically ordained, is undoubtedly made a saint by the merits of St. Peter, St. Ennodius Bishop of Pavia bearing witness, and many holy fathers agreeing with him. As it is contained in the decrees of Pope St. Symmachus.
24. By his command and consent, it may be lawful for subordinates to bring accusations.
25. He may depose and reinstate bishops without assembling a Synod.
26. He who is not at peace with the Roman Church shall not be considered ‘catholic’.
27. He may absolve subjects from their fealty to wicked men.

If the cross-tradition dialogues via Rome are now backtracking on these papal powers, as they appear to be (see Chieti, for example), then how can the Dictatus Papae and Deusdedit’s subsequent canon law not be viewed as anything less than an extraordinary development in the papacy? And if the papacy was different in form and power, in any extraordinary capacity (aside from administrative), from the apostolic era to the 11th century, and to the now 21st century, how can the institution claim an apostolic origin of extraordinary power in light of the fact of any sort of development or change? Consistency is critical in order to maintain the veracity of the papacy as Rome defines it, but if that consistency doesn’t exist, what basis does the papacy have to stand on in its current form?

I would submit that if Rome were to maintain the Dictatus Papae, or its later definition of Papal Infallibility and Supremacy, or whichever definition for that matter, it would be more credible and consistent in terms of the presentation of papal power. However, this is clearly not the case.