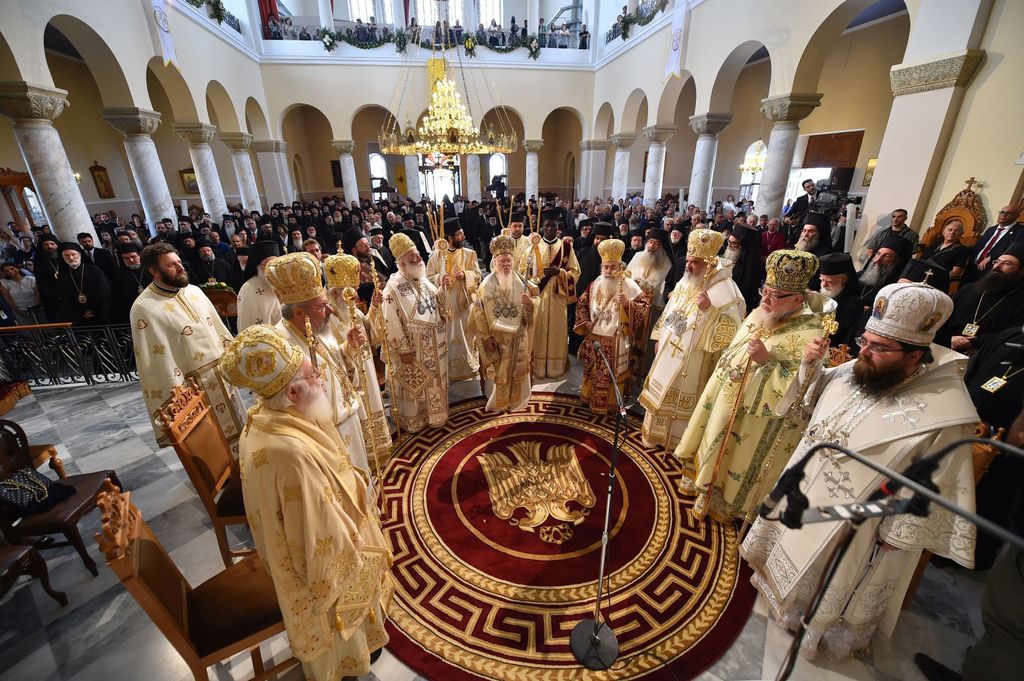 “Conciliarity” is a term that Orthodox favor and hail regularly.  We are “conciliar,” the Orthodox say.  While we do have a first among our Primates in Constantinople, we still understand that Christ our God is the Supreme Head of the Church, even over he who is entrusted over the prime See.  As such, we also believe, in conciliar fashion, that the Church, by Her bishops, can rule and depose any primate by design.  We are conciliar in that we emphasize the importance of a Council and its ecclesiastical powers in certain circumstances.  If you’re Orthodox, this should be 101 for you, but this article will not be highlighting Orthodox conciliarity.  Rather, this article will serve as a presentation to mutability, convenience, and quasi-conciliarity within the Roman Catholic Church, through a long-forgotten ecumenical/ecumenical decree known as Haec Sancta (or Sacrosancta).

In 1414, the Council of Constance was called by Pope John XXIII (later regarded as an “Anti-Pope”) to settle a number of items, most notably being who the true Roman Pontiff would be, as during this time, there were three alleged Popes (John XXIII, Gregory XII, and Benedict XIII) that all claimed supreme papal authority over Rome.  Pope John XXIII would later flee the Council after offering to resign only if all the other popes would oblige in the same.  By the 5th Session of the Council of Constance, there was no papal presence, and so the Council enacted “Haec Sancta” to deal with this issue of the papacy at large.

The 5th Session reads as follows:

[Decrees of the council, concerning its authority and integrity, which had been abbreviated by cardinal Zabarella at the preceding session, against the wishes of the nations, and which are now restored, repeated and confirmed by a public decree]

In the name of the holy and undivided Trinity, Father and Son and holy Spirit. Amen. This holy synod of Constance, which is a general council, for the eradication of the present schism and for bringing unity and reform to God’s church in head and members, legitimately assembled in the holy Spirit to the praise of almighty God, ordains, defines, decrees, discerns and declares as follows, in order that this union and reform of God’s church may be obtained the more easily, securely, fruitfully and freely.

First it declares that, legitimately assembled in the holy Spirit, constituting a general council and representing the catholic church militant, it has power immediately from Christ; and that everyone of whatever state or dignity, even papal, is bound to obey it in those matters which pertain to the faith, the eradication of the said schism and the general reform of the said church of God in head and members.

Next, it declares that anyone of whatever condition, state or dignity, even papal, who contumaciously refuses to obey the past or future mandates, statutes, ordinances or precepts of this sacred council or of any other legitimately assembled general council, regarding the aforesaid things or matters pertaining to them, shall be subjected to well-deserved penance, unless he repents, and shall be duly punished, even by having recourse, if necessary, to other supports of the law.

Next, the said holy synod defines and ordains that the lord pope John XXIII may not move or transfer the Roman curia and its public offices, or its or their officials, from the city of Constance to another place, nor directly or indirectly compel the said officials to follow him, without the deliberation and consent of the same holy synod. If he has acted to the contrary in the past, or shall in the future, or if he has in the past, is now or shall in the future fulminate any processes or mandates or ecclesiastical censures or any other penalties, against the said officials or any other adherents of this sacred council, to the effect that they should follow him, then all is null and void and in no way are the said processes, censures and penalties to be obeyed, inasmuch as they are null and void. The said officials are rather to exercise their offices in the said city of Constance, and to carry them out freely as before, as long as this holy synod h being held in the said City.

Next, that all translations of prelates, or depositions of the same, or of any other beneficed persons, officials and administrators, revocations of commendams and gifts, admonitions, ecclesiastical censures, processes, sentences and whatever has been or will be done or accomplished by the aforesaid lord pope John or his officials or commissaries, since the beginning of this council, to the injury of the said council or its adherents, against the supporters or participants of this sacred council, or to the prejudice of them or of any one of them, in whatever way they may have been or shall be made or done, against the will of the persons concerned, are by this very fact, on the authority of this sacred council, null, quashed, invalid and void, and of no effect or moment, and the council by its authority quashes, invalidates and annuls them.

Haec Sancta clearly demonstrates the value of the conciliar model in which Rome would go on to later reject through the First Vatican Council (ch. 3). The clear hypocrisy comes from Rome’s willingness to utilize ecumenical conciliarism to remedy a seemingly impossible situation in the three popes of Rome, then reject it altogether once the issue is resolved.

For a clearer understanding, the basic sequence of events proceeded as follows:

1. Haec Sancta conciliarity was issued and approved by the Council.

2. Haec Sancta was utilized to its fullest capacity to depose two of three popes and accept the resignation of the the third pope.

3. As part of accepting the resignation of the third pope, the decree was revoked and rejected in full along with the Sessions of the Council of Constance leading up to the resignation.

4. Pope Martin V was elected as sole Pope of the Roman Catholic Church by the Council.

Roman theologians have dealt with this hypocrisy in asserting a number of things, namely that the decree 1) was not ecumenical, 2) was declared under Anti-Pope(s), albeit retroactively, 3) was missing verbiage, such as anathema, order, define, establish, decree, and/or declare, 4) was simply pastoral or disciplinary, but not dogmatic or infallible, and a myriad of other assertions. The deepest issue with this, however, is that Haec Sancta was actually passed, utilized to heal the Western schism, and then nullified as a matter of papal inconvenience.

To approve and pass a decree, use it to one’s advantage, and then nullify it is the very idea of hypocrisy. Add to that the constant accusations from the Roman West to the Orthodox East of “conciliar heresy,” the circle of hypocrisy completes itself. The fact remains that when it was necessary, the Roman Catholic Church healed itself by way of ecumenical conciliarism.

This can never be forgotten.