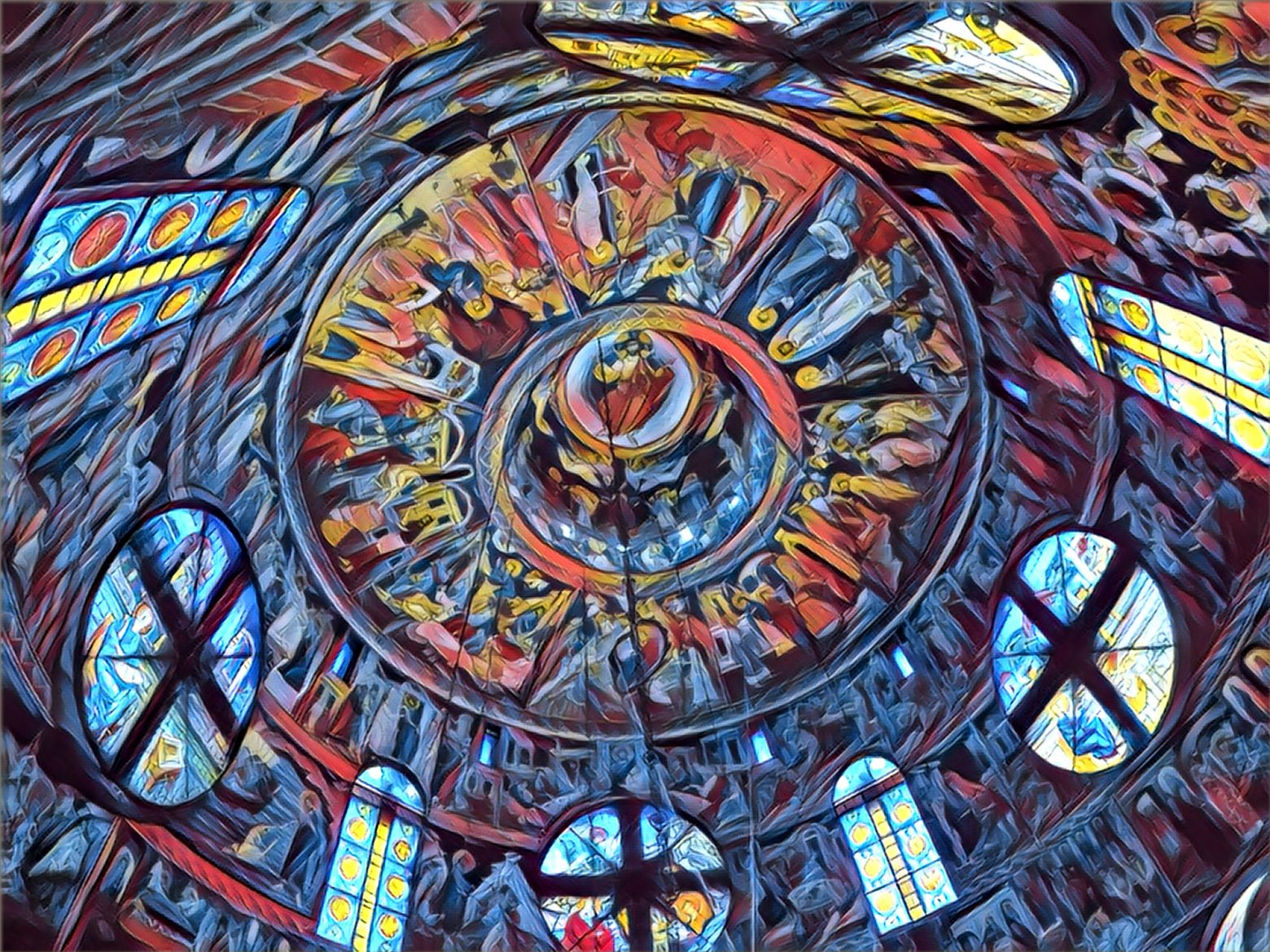 The issue of icons and idols is a long-standing one within Protestant circles, namely those of the Reformed persuasion. The Reformed traditions often take extreme approaches to the issue of icons, declaring temples embellished with these holy images as “synagogues of Satan” and accusing Christians who affirm the necessity of icons in Christian temples as idolaters. It is common to hear and observe our Reformed friends equivocate icons to idols, while similarly equating the veneration of icons to the worship of idols.

These claims are unhelpful within the context of fruitful dialogue, and they are doubly unhelpful when they are made from an improper understanding of the Holy Scriptures. On the one hand, idolatry is exclusively an issue of the heart and cannot be measured effectively by mere observation or presumption. Idolatry may manifest itself in many forms, from fear to gluttony to slothfulness, and the works. On the other hand, adopting a viewpoint that is nearly unprecedented throughout all of Church history—having been resoundingly defeated at Nicaea 2 ecumenically–and making both individual and broad condemnations based on the lack of universal precedence says more about the tradition hurling the accusations than it does about those receiving them.

There are many individual arguments that the Reformed posit against the use of iconography. The Regulative Principle is one, and Exodus 20 (Ten Commandments) is another. These two, aside from some theological arguments or appeals to invalid local robber councils of Old, are their strongest positions.

With respect to Exodus 20 and the Ten Commandments, we must engage the Holy Scriptures to gain a full understanding of the context at hand. Fortunately, we don’t need to look very far to understand the context of the second commandment, which is the basis of their entire argument against the presence and usage of iconography.

In Exodus 20:1-6, the Holy Scriptures begin to record the giving of the Law:

And God spoke all these words, saying: “I am the Lord your God, who brought you out of the land of Egypt, out of the house of bondage. “You shall have no other gods before Me. “You shall not make for yourself a carved image—any likeness of anything that is in heaven above, or that is in the earth beneath, or that is in the water under the earth; you shall not bow down to them nor serve them. For I, the Lord your God, am a jealous God, visiting the iniquity of the fathers upon the children to the third and fourth generations of those who hate Me, but showing mercy to thousands, to those who love Me and keep My commandments.

Appearing quite clear, there are a few statements that must be considered before firmly affirming a doctrine that requires the Reformed to condemn most other Christian traditions. Firstly, prior to giving the Law, God declares that He is God and that He brought the Jews out of the land of Egypt. The Law is then given. The Jews were 1) not to have any gods before God, and 2) not to make any carved image of anything with the likeness of that in a) heaven above, b) earth beneath, or c) water under the earth. The Jews were not to 3) bow down to these idols nor serve them. God also notes that He is a jealous God.

From a basic reading of this text, we can garner that God brought the Jews out of the perverse land of Egypt and forbade them to make for themselves idols and to serve them. That much is clear. But what idols are being referenced here? If read without any further contextual consideration, a case could possibly be made for the Reformed side on the merit of this passage alone, but this passage presents an idea that should not be so quickly skipped over. The prohibition on carved images is prefaced by the statement that the Jews were brought out of the land of Egypt. The commandment itself references three locations specifically within the context of its prohibition: 1) heavens above (sky), 2) earth beneath (earth), and 3) waters below (under earth or world).

This commandment isn’t referencing a generalized prohibition on any and every image, but on Egyptian idols/gods specifically.

Each of these three categories refer back to a specific classification of Egyptian gods, covering the whole of the Egyptian god spectrum:

While this idea seems to assume much based on a singular passage, just as the Reformed prohibition of imagery does, we find a clear affirmation of this very idea in the Prophet Ezekiel, bringing to light the context of Exodus 20.

In Ezekiel 20:5-11, the Prophet Ezekiel writes (my bold for emphasis):

Here, we find indisputable language referencing back to the events leading up to Mt Sinai, along with the context of the commandments given on Sinai, especially as it pertains to the second commandment. The Prophet Ezekiel is clear: the second commandment was written in reference to Egyptian gods and idols specifically, as Israel was brought out of the land of Egypt after a long period of captivity. This commandment was not a generalized declaration as is commonly presented by the Reformed tradition and many others, but a specific decree pertaining to Egyptian god worship, of which the Jews were regularly guilty of and just delivered by God from. Moreover, while this commandment may also have general secondary implications for all types of idol worship, it bears no application towards Orthodox iconography because in every venerative act, the Lord Jesus Christ is at its center as the primary Subject. But for the sake of this writing, we are evaluating the merits of basing an entire condemnation of iconography on a singular passage taken out of context and having no implication on iconography itself.

The Prophets go on to write:

‘Thus says the Lord God: “I will also destroy the idols, And cause the images to cease from Noph; There shall no longer be princes from the land of Egypt; I will put fear in the land of Egypt…
Thus I will execute judgments on Egypt, Then they shall know that I am the Lord.” ’ Ezekiel 30:13,19

The burden against Egypt. Behold, the Lord rides on a swift cloud, And will come into Egypt; The idols of Egypt will totter at His presence, And the heart of Egypt will melt in its midst. Isaiah 19:1

The spirit of Egypt will fail in its midst; I will destroy their counsel, And they will consult the idols and the charmers, The mediums and the sorcerers. Isaiah 19:3

It is abundantly clear through both Ezekiel and Isaiah that the Jews struggled with idolatry through the worshiping of Egyptian gods, and it is also clear that the focus of the second commandment–as much of the whole of God’s commandments–centered around Israel’s time and experience in Egypt. In fact, the Ten Commandments also appear to be a rehabilitation or recapitulation of Israel’s time in Egypt, with God setting boundaries for the Jews and condemning their previous acts under Egyptian rule. The Jews were worshiping Egyptian idols; therefore, God forbade them directly in the second commandment. Ezekiel confirms this blatantly, and Isaiah corroborates to a large degree. Having used depictions of angels in the Temple, the Jews would have had known that the prohibition was blatantly referring to Egyptian idols first and foremost, and then idols as a generalized concept in the second. Note that this is not to say that the Law of God is somehow without any purpose–not at all! God’s Law is a guide to all true Christians and will never be obsolete in any respect.

While this hotly contested issue between Orthodox Christians and the Reformed remains one of the focal points of disagreement, through reading the Holy Scriptures within their proper context, we can see that this issue is not only clear, but quite cut-and-dry. Moreover, if we apply an interpretive schema anything remotely resembling Sola Scriptura and the Regulative Principle of Worship which the Reformed traditions hold so near and dear, we could not help but to arrive at the following conclusions by sheer contextual necessity: icons are not idols, and the second commandment refers specifically to the “idols of Egypt.”

*It should be noted for the sake of clarity that in no way does this interpretation of Exodus 20 nullify or propose the nullification of the prohibition against the sin of idolatry as a general rule.*