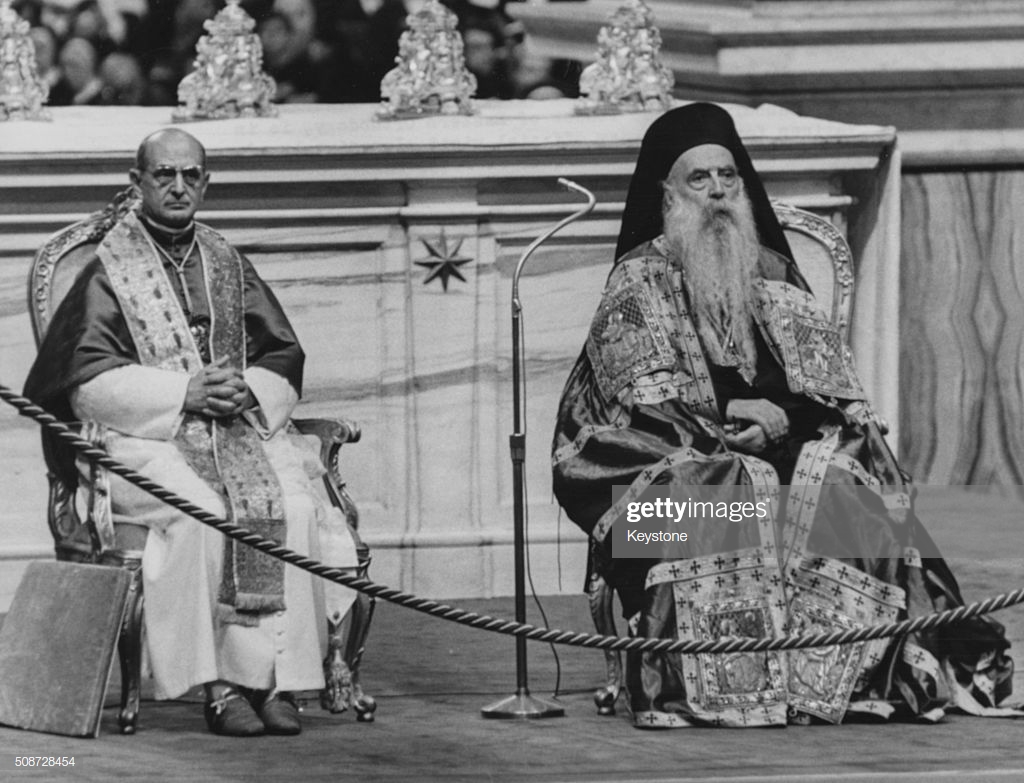 While the Orthodox Church and the Roman Church continue to have critical issues dividing our communions, I wanted to hearken back to the time when Constantinople and Rome mutually dropped excommunications (“into oblivion”) pronounced against each other and their respective communions. While we are no longer under mutual excommunication, nor under communication, it would appear that we are at an odd place in history where we are in a communicative limbo. I’m interested in hearing your thoughts below on where you believe this declaration puts the Orthodox and the Roman Catholics, relationally.

Following is the text of the joint Catholic-Orthodox declaration, approved by Pope Paul VI and Ecumenical Patriarch Athenagoras I of Constantinople, read simultaneously (Dec. 7) at a public meeting of the ecumenical council in Rome and at a special ceremony in Istanbul. The declaration concerns the Catholic-Orthodox exchange of excommunications in 1054.

1. Grateful to God, who mercifully favored them with a fraternal meeting at those holy places where the mystery of salvation was accomplished through the death and resurrection of the Lord Jesus, and where the Church was born through the outpouring of the Holy Spirit, Pope Paul VI and Patriarch Athenagoras I have not lost sight of the determination each then felt to omit nothing thereafter which charity might inspire and which could facilitate the development of the fraternal relations thus taken up between the Roman Catholic Church and the Orthodox Church of Constantinople. They are persuaded that in acting this way, they are responding to the call of that divine grace which today is leading the Roman Catholic Church and the Orthodox Church, as well as all Christians, to overcome their differences in order to be again “one” as the Lord Jesus asked of His Father for them.

2. Among the obstacles along the road of the development of these fraternal relations of confidence and esteem, there is the memory of the decisions, actions and painful incidents which in 1054 resulted in the sentence of excommunication leveled against the Patriarch Michael Cerularius and two other persons by the legate of the Roman See under the leadership of Cardinal Humbertus, legates who then became the object of a similar sentence pronounced by the patriarch and the Synod of Constantinople.

3. One cannot pretend that these events were not what they were during this very troubled period of history. Today, however, they have been judged more fairly and serenely. Thus it is important to recognize the excesses which accompanied them and later led to consequences which, insofar as we can judge, went much further than their authors had intended and foreseen. They had directed their censures against the persons concerned and not the Churches. These censures were not intended to break ecclesiastical communion between the Sees of Rome and Constantinople.

4. Since they are certain that they express the common desire for justice and the unanimous sentiment of charity which moves the faithful, and since they recall the command of the Lord: “If you are offering your gift at the altar, and there remember that your brethren has something against you, leave your gift before the altar and go first be reconciled to your brother” (Matt. 5:23-24), Pope Paul VI and Patriarch Athenagoras I with his synod, in common agreement, declare that:

A. They regret the offensive words, the reproaches without foundation, and the reprehensible gestures which, on both sides, have marked or accompanied the sad events of this period.

B. They likewise regret and remove both from memory and from the midst of the Church the sentences of excommunication which followed these events, the memory of which has influenced actions up to our day and has hindered closer relations in charity; and they commit these excommunications to oblivion.

C. Finally, they deplore the preceding and later vexing events which, under the influence of various factors—among which, lack of understanding and mutual trust—eventually led to the effective rupture of ecclesiastical communion.

5. Pope Paul VI and Patriarch Athenagoras I with his synod realize that this gesture of justice and mutual pardon is not sufficient to end both old and more recent differences between the Roman Catholic Church and the Orthodox Church.

Through the action of the Holy Spirit those differences will be overcome through cleansing of hearts, through regret for historical wrongs, and through an efficacious determination to arrive at a common understanding and expression of the faith of the Apostles and its demands.

They hope, nevertheless, that this act will be pleasing to God, who is prompt to pardon us when we pardon each other. They hope that the whole Christian world, especially the entire Roman Catholic Church and the Orthodox Church will appreciate this gesture as an expression of a sincere desire shared in common for reconciliation, and as an invitation to follow out in a spirit of trust, esteem and mutual charity the dialogue which, with Gods help, will lead to living together again, for the greater good of souls and the coming of the kingdom of God, in that full communion of faith, fraternal accord and sacramental life which existed among them during the first thousand years of the life of the Church.